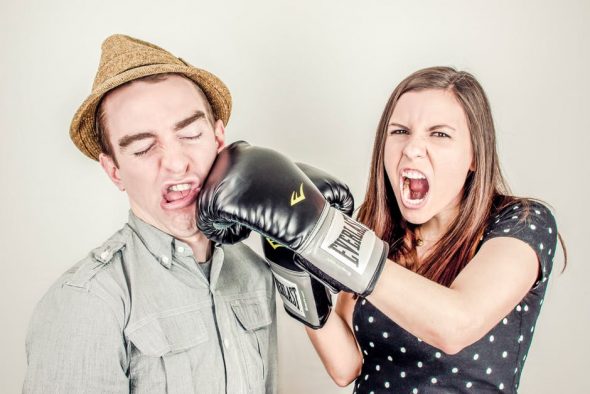 Its traditionally considered to be a reserved game, much loved by Werther’s Originals enthusiasts and saggy tights supporters, but bingo has seen its fair share of scraps over the years, some so serious that it begs the question; wouldn’t it be easier, and safer, to play online bingo instead? We’ll list five of the strangest punch ups at the bingo halls. So what really goes on when you play in the halls and not online bingo?

Police and ambulance services responded to calls of a violent brawl between two groups of women at a Gala Bingo hall in Torquay, Devon.

Chairs were reportedly thrown during the incident and resulted in two women being treated for facial injuries and six punters receiving a life time ban from every Gala Bingo hall.

One woman who saw the bust up said: “it’s not the sort of thing you expect to see at the bingo. It was vicious”

“There had been a disagreement in the foyer before we started playing. The games was interrupted by two groups, talking and arguing with each other. The next thing I saw was one girl practically flying off her chair. I don’t know if it was because someone had punched her or she was going for someone else.”

No one was arrested during the incident.

A pair of grannies from South Wales have been banned for life by their bingo club after a fight over a “lucky chair” leaving one woman with a broken nose and two black eyes.

Police were called to the Castle Bingo Hall, Bridgend, South Wales, after Sandra Fry 55, struck a rival player, Lynn Want, 58, because she had beaten her to her sear.

Security staff had to intervene as 500 other players watched in astonishment.

Both players received a lifetime band as a result of the incident.

Mrs Want said: “She shouted at me and then smacked me on the nose. I was taken to casualty and later had an operation. It was very painful.

“I think a lifetime ban is a bit strong and I am going to appeal.”

Police were called to Gala Bing, Derby, after a ten person brawl erupted at the venue.

Witnesses say that a rowdy group in their 20s had traded blows with a group of middle-aged players who were annoyed at the noise they were making during the game.

Handbags were reportedly thrown during the incident before security had intervened and the police were called.

Wendy Lee, 50, who was at the hall that day said she had ‘never seen anything like it’, in her 20 years of playing bingo.

She said: “It was unbelievable, I’ve never seen anything like it in all my life.

“My friend who I took has never been to bingo before and he said to me ‘if this is what happens, I’m coming again, it’s very entertaining”.

A fight between two women believed to be in their 60s, in sheltered accommodation in Rotherham, South Yorkshire had to be broken up when they came to blows after one of the women accused the other of shouting ‘house’ too early.

One woman was left with a tenancy warning by Rotherham Borough Council after the brawl.

South Yorkshire PCSO Simon Ellis said: “We spoke to both parties and gave them advice. We just said they can’t be acting like that and one of them will be getting a warning from the council.”

“It was one of the first calls of our evening shift and it’s definitely not the usual type of call we get.”

A bingo bust-up by two waring pensioners was halted by Kent Police for the second time in a year after the elderly pair – aged 90 and 92 – reignited their ongoing feud at Herne Bay’s Connaught Bingo Club, reportedly ending with punches being thrown and police intervention.

The rows are believed to have been sparked by a dispute over each woman winning on fruit machines the others had put money in.

No arrests have been made but it is believed that the rivals have been suspended by the club.